Last week in this blog, we gave Josh Allen a checklist of items he needed to work on for the Buffalo Bills to roll through the playoffs and make it to Super Bowl LVII at State Farm Stadium in Glendale, Arizona. One of the most important items on that list was that Allen needs to stop throwing interceptions if the Bills are going to come out of the top-heavy race in the AFC, which also includes the Kansas City Chiefs and the Cincinnati Bengals. After the Bills’ win over the Miami Dolphins, it is safe to say that Allen still has homework to do. 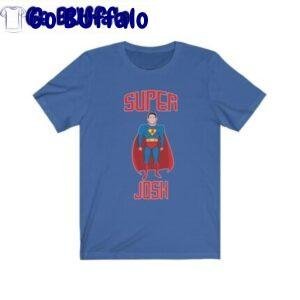 Get Your Josh Allen Swag Here!!

Allen threw 14 interceptions in the regular season. That is too many for a quarterback with his accuracy and ability to throw on the run. He then threw another pair in the Bills’ win over the Dolphins, a game much closer than many expected coming into the weekend, mainly due to Allen’s continued issues with throwing picks.

Other issues kept the score closer in that one. Playing an opponent three times in the same season is challenging, as that team knows more about you than other opponents. Getting a division rival in the playoffs is always tricky – look at how the Benglans struggled against the Baltimore Ravens – as they can take advantage of the tendencies they have learned in two other games in the previous six months.

Even so, it is concerning. Allen is battling in a three-horse race with Patrick Mahomes and Joe Burrow to be the face of the league moving forwards. Allen has all the skills to be that guy, but his interceptions prevent him from being in the MVP conversation with the other two this season. The Afc is loaded with great young passers – Justin Herbert and Trevor Lawrence are the next two in line – so Allen needs to get these Bills to a Super Bowl sooner rather than later. This could be his year, but he needs to relax and make the open throws instead of forcing the issue.

It is very much a First World problem for Buffalo to have. There are maybe half a dozen teams in the league that would keep their incumbent quarterback over Allen, and even that is probably stretching the number. Allen has everything a modern quarterback needs, plus his durability is outstanding. If he keeps the interception numbers down throughout the rest of this post-season, then Buffalo has every shot at a trip to Arizona in February.